Time savers tip; poach a large fillet of salmon and then store it in the fridge to supply 2-3 of these filling salads for your lunchbox or summery suppers for the week.

In addition to this simple salad idea, some really interesting information in the below article about the role of Omega 3 in your gut health from Medical News Today:

Omega 3 fatty acids are essential fatty acids, which means that although we need them to stay healthy, the human body cannot produce them on its own – so we have to get them from food.

The benefits of a diet rich in omega-3s are well known. The fatty acids seem to lower the “bad” kind of cholesterol, lower high blood pressure, and improve overall cardiovascular health.

Some studies have also suggested that omega-3 can reduce symptoms of rheumatoid arthritisand improve bone strength, as well as protect against age-related cognitive decline and dementia.

And now, researchers from the University of Nottingham’s School of Medicine, in collaboration with scientists from King’s College London – both in the United Kingdom – add to the long list of omega-3’s benefits.

The new study – led by Dr. Ana Valdes, an associate professor and reader at the University of Nottingham – suggests that the compound can improve the biodiversity of the gut.

How omega-3 may improve gut health

The researchers analyzed levels of DHA, which is a type of omega-3 fatty acid, as well as total omega-3 serum levels and microbiome data from 876 twins.

“This cohort of 876 volunteer women had previously been used to investigate the human genetic contribution to the gut microbiome in relation to weight gain and disease,” says Dr. Valdes.

Dr. Valdes summarizes the findings, saying, “We […] found [that omega-3 intake], together with […] serum levels of omega-3, were strongly associated with the diversity and number of species of healthy bacteria in the gut.”

The association was independent of whether or not the participants also had a diet rich in fiber.

First study author Dr. Cristina Menni, of King’s College London, adds, “We also found that specific bacteria that have been linked to lower inflammation and lower risk of obesity are increased in people who have a higher intake of omega-3 fatty acids.”

In an attempt to understand the mechanism behind this association, the researchers performed further tests and found that “high levels of omega-3 in blood […] correlated with high levels of a compound called N-carbamylglutamate (NCG) in the gut.”

“[NCG] has been shown in animals to reduce oxidative stress in the gut. We believe that some of the good effects of omega-3 in the gut may be due to the fact that omega-3 induces bacteria to produce this substance.”

“Our study is the largest to date to examine the relationship between omega-3 fatty acids and the composition of the gut microbiome,” says Dr. Valdes.

For the full article, navigate to the link below:

Breakfast just got better. superfood start to the day There is the delightful Chocolate Chia Oats. Its is simple and quick to prepare, but also delicious and perfect for winter when a warm breakfast is what we yearn for. The ingredients list is pretty perfect, with only 3 ingredients listed; Oats, Cacoa Nibs & Chia Seeds, all of the highest quality and crammed full of real nutrients. There is no sugar, and no preservatives or additives of any kind, this is clean eating of the highest order.

Then for those who are high on Low Carb food options, the Flax & Coconut Porridge is a match made in heaven. Its high in Omega 3 and fibre, two food stuffs that we can all do with more often. I really like the flavour and texture, it’s nutty and although it is a porridge it still has enough texture. To prepare one simply has to add either hot water, or milk/ or any milk substitute that you prefer. I also added the Flax & Coconut porridge to a banana & peanut butter smoothie with a pinch of cinnamon and some almond milk and it worked really well.

But my very best out of these three (difficult as it was) is the Sprouted Buckwheat Cereal, buckwheat has become one of my favourite things this year, it is high in protein and has a delicious flavour. This cereal works really well with a dash of almond or coconut/ rice milk and has sliced almonds and goji berries added into the mix. It has lots of crunch and keeps you going until lunch.

Now I guess there is no excuse not to have a super healthy start to the day.

In dedication to your best health,

This is my Mexican Corn Salad with a #Buttermilk #

An ode to oats: Omega 3 overnight oats made with

A gorgeous hike yesterday at our beloved @somerset

For supper there was sweet peppers stuffed with ar 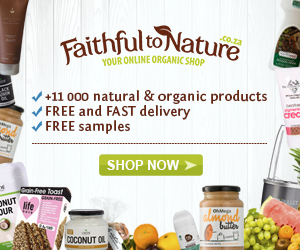